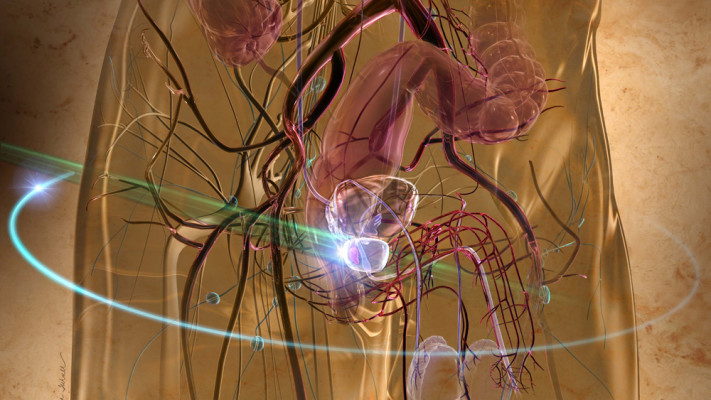 Since testicles and the prostate are part of the male reproductive system, we tackle the disease that is cancer affecting both these organs.

The testes are the male productive organs that secrete sperm used for reproductive reasons. Thought lumps and cysts are sometimes found on the testes, not all of them are cancerous. Since the testes are a sensitive part of the sexual organs of a male, the tumors can be painful and so the cancer can be detected in earlier stages. The recovery rate for this form of cancer is high and that are few fatalities, thanks to advances in science and medicine. Even though cures have been discovered and successfully implemented, the causes for testicular cancer have not been determined. But, like all cancers, the source is usually cells that multiply at faster rates than usual, without older cells being replaced. The accumulated cell cluster gets cancerous and if not treated on time, can spread to other organs of the body.

The signs and symptoms of testicular cancer are many and it is recommended by the medical fraternity that regular tests be taken to help prevent the disease, rather than searching for a cure. Usually a suspected patient can determine if he has this disease because there would either be a feeling of heaviness in the private region, pain that can be mild or severe, a lump formed on the testes or lower back pain. The diagnosis for testicular cancer can be determined by a scan or ultrasound. If a lump of some sort is found, then a biopsy is conducted to see if it is cancerous or benign.

Depending on the stages of the cancer, treatment is conducted. In severe cases where the cancer is in danger of spreading, the testes may have to be surgically removed. The main purpose of medical procedures is to obtain a permanent cure and prevent the disease from spreading. There are also the options of radiation and chemotherapy that target that particular region of infected tissue where the cancer cells are concentrated. The good news, as mentioned earlier, is that because of advanced medical facilities and early detection of the cancer, over 80-90% of cases are cured. It is very important for a man to go for regular check-ups as a preventive measure.

This cancer is formed in a gland of the male reproductive system. The development of the disease is quite slow as compared to other cancers, hence it is usually diagnosed in later stages of life and that is why most patients are elderly. The causes of prostate cancer are many and include age, genetics and race. As per research, 99% of cases for prostate cancer are over 50 years of age. Patients are usually from the Caucasian side of the population and hence the cause could be connected to lifestyle, like diet and consumption of processed foods and red meats to a great extent.

As mentioned, cases are connected to those who are passed the mid-age line. The signs and symptoms of prostate cancer include increased urination, frequent urinating in the night, sometimes blood in the urine and pain during urination. Also, there might be a discolored liquid that is emitted and difficulty with sexual stimulation and arousal. The diagnosis for the disease mainly involves health check-ups especially after a certain age, like when the male is in his late 30s and 40s. This helps determine the risk factors in falling victim to the disease. Those who are suspected patients of the cancer can go through biopsies after taking ultrasounds or magnetic resonance imaging (MRI) scans.

Like other forms of cancer, chemotherapy and radiation therapy rank the highest in treating this disease. The main purpose of treatment is to eliminate any cancerous cells from growing and spreading to other parts of the body. Because it is cancer of a sexual organ of the human system, hormonal therapy is another form of treatment to cure prostate cancer. Depending on the stage of cancer, treatment is recommended, but the good news is that a high percentage of patients are cured and thrive on the road to recovery especially in Western countries where ample medical care and awareness is available.

Liked this article on Testicular And Prostate Cancer and have something to say? Comment below and don’t forget to SHARE THIS ARTICLE!